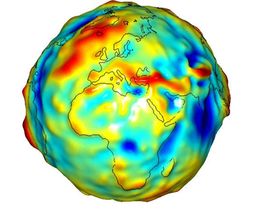 Geophysics is the physics of the Earth, studying and quantifying geological phenomena, their constituent processes and their physical properties. This can be through gravity, electrical, seismic or magnetic methods, through analogue experimentation or through numerical modelling and simulation work.

Image courtesy of Wikipedia, courtesy of NASA - showing a gravity model of the Earth developed from their GRACE satellite mission.

The Porcupine Basin is a narrow failed rift, offshore SW Ireland, featuring extreme crustal thinning. The M61/2 survey (May 2004, T. Reston and B. O'Reilly) allowed for the acquisition of seismic refraction data across and along the basin, along 5 transects. The processing of the data along these transects will give us information about the crustal structure across the basin, faulting due to the crustal extension, nature of the upper-mantle, etc. This project is funded by Petroleum Infrastructure Programme (PIP).

Formation of oceanic crust is an interplay between magma and the cooling hydrothermal system above that its own heat drives. To understand this system we must understand where and how water circulates through the crust.

Ocean crust is riddled with faults and other permeable pathways along which water preferentially flows. We seek to use basic numerical models of circulation in porous media to understand how much of an influence on crust formation these anomalous features have, compared to the bulk, unfractured crust.

We quantify the errors inherent in the current methods of geospeedometry, which lets one obtain the cooling rate of a rock, using mineral trace element chemistry. Calcium-in-Olivine geospeedometry is useful for deep ocean crust.

We want to use this proxy to figure out how ocean crust actually accretes, it provides key evidence as to how magma chambers and hydrothermal systems interact to produce new lithosphere. But to do so we first have to determine how reliable the method is and therefore how much can be inferred from results.

There is a genuine need for better, more robust modelling of suspended sediment transport in the coastal zone, both to understand its morphological evolution and it's impact on biogeochemical cycling, ecosystems services and to guide engineering applications such as dredging and defence schemes against erosion and flooding.
The suspension of sediment in turbulent flows is a complex case of fluid-particle interaction, governed by shear stresses (momentum exchanges) at the bed and within the benthic boundary layer (BBL). The intermittent transfer of momentum is a manifestation of coherent turbulent vortex structures within the flow. The passage of such structures (or clusters of) is often related to perturbations of bottom sediment, which may be entrained and maintained in suspension if sufficient turbulent energy is provided. The first part of my PhD investigated the temporal and scale relationships between wave–generated boundary layer turbulence and event–driven sediment transport in oscillatory flow in the nearshore. This involved complex statistical, spectral, quadrant and wavelet analysis of high frequency nearshore measurements of turbulence and suspended sediments (medium sand), collected as part of the EU-funded Barrier Dynamics Experiment II (BARDEX II). The following step aims to develop a 3D numerical model in OpenFOAM which would reproduce the fine scale turbulence structures observed over a fixed rippled bed in oscillatory flow. The 3D velocity field, turbulent components, correlations (stresses) and quadrant structures will then be linked to observed sediment resuspension events. The model will be validated against a set of laboratory experiments undertaken at the Fast Flow Facility at HR Wallingford.