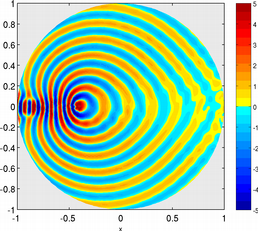 Sound propagating from an iso-thermal jet

Wave-based methods belong to a new class of computational methods that improve on existing techniques by including some known information on the physics into the numerical schemes. For instance for sound waves, the solution is represented locally as a sum of simple plane waves. In that way the dispersion properties of the acoustic waves are directly built into the numerical model, thus significantly enhancing the accuracy of the approximation.

In this project we are developing wave-based methods to model sound propagation in inhomogeneous moving media, with a view to predict and reduce aircraft noise. A novel approach combining the discontinuous Galerkin methods and wave-based interpolation was developed and compared against existing methods in computational aero-acoustics. Results have shown that for a similar computational cost the wave-based DGM is able to reduce the numerical error by several orders of magnitude. This method is currently being extended to include all the features required to predict sound propagation in complex large-scale problems such as an aircraft engine.