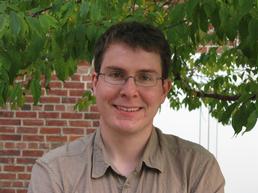 Andreas has been studying physics at the University of Duisburg-Essen, Loughborough University, and Humboldt University Berlin, where he received his undergraduate degree. The title of his final thesis has been "Modeling Phonons in Semiconductor Nanostructures". Based on a classical description of phonons he used molecular dynamics simulations in order to investigate numerically how phonon properties like the density of states within a nanodot depend on its material, size, and shape.

In 2007 Andreas joined Hans Fangohr's group at the University of Southampton to start his PhD studies on "Applications of Hierarchical Matrices for Micromagnetic Simulations of ferromagnetic Mesostructures". His work is part of a ESPRC project, which focusses on the fabrication of ferromagnetic and superconducting nanostructures using a novel growth method based on chemical electrodepositon. Andreas' contribution to the project is to provide simulations based on the so called micromagnetic model for a characterisation of the ferromagnetic structures. The micromagnetic model is a very successful, phenomenological model for ferromagnetic materials, which allows for a numerical investigation of the hysteresis properties of ferromagnetic structures. It plays a crucial role for understanding the process of reading and writing data in modern harddiscs and new magnetic random access memories (MRAM) , and is therefore not only popular in academia but also in industry.

At the heart of the micromagnetic model lies a partial differential equation (Landau-Lifshitz-Gilbert equation), which is usually solved by either the finite difference method (FDM) or the finite element method (FEM). While the former method is generally more efficient, the latter is more flexible in the sense that it can be applied to structures of arbitrary geometry. The inefficiency of the finite element method is due to the so called magnetostatic term of the Landau-Lifshitz-Giblert equation, which represents a long-range interaction. The current standard way to compute the magnetostatic term involves the assembly and storage of a dense, quadratic matrix (resulting from a discretisation of an integral equation), whose number of entries scales quadratically with the number of nodes sitting on the surface of the finite element mesh. This leads to performance problems in the algorithm when one considers structures with a high number of nodes on the surface. Therefore Andreas approximates this dense matrix by a so called hierarchical matrix. When N is the number of surface nodes, this matrix format only requires the storage for ~log(N)*N data entries (for more information, please have a look at the corresponding publication. This improved scaling behavior is important when one wants to study ferromagnetic structures with dimensions of several hundreds of nanometers and above. Currently Andreas is working on a publication, which uses micromagnetic simulations in order to understand the ferromagnetic properties of core-shell strutures of pyramidal shape. These core-shell structures contain a ferromagnetic layer, which is grown over a non-magnetic core.

Andreas has experience in teaching computer science and mathematics. In Berlin he was giving exercises in mathematics for physics teacher. In Southampton he was a demonstrator in the course SESA2006, which uses the language Python to teach basic numerical methods.