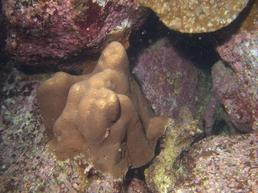 The coral communities and coral reefs of the Galapagos Marine Reserve support tens of thousands of species, including many rare and endemic species. Reef-building corals are sensitive to elevated temperatures, which have been linked to coral bleaching (loss of symbiotic zooxanthellae) and therefore their distribution around the islands has been strongly affected by extreme climatic events over the last 30 years. Following the 1982–3 El Niño-Southern Oscillation event, coral cover was reduced by 95 %, with further mortality in the 1997–8 event. Although there has been significant recovery of the communities in recent years, there is concern that by 2100 the global climate system and sea surface temperatures will warm by between 1.4° and 5.8°C, which could result in 100% mortality of Galapagos corals. This project developed a temperature and depth bioclimatic envelope (or niche) model of potential coral distribution, developed using an historical analysis of monthly sea surface temperatures, derived from the NOAA AVHRR satellite data over the period 1985–2001, and a near-shore bathymetry data set derived from Shuttle Radar Topography Mission digital topographic data integrated with ship-based depth sounding surveys and digitised hydrographic maps. The model was validated against known coral community and coral reef localities. Application of the model can support the identification of potential new areas where conditions for coral growth are favourable and enable predictions of the effects of future climate change.