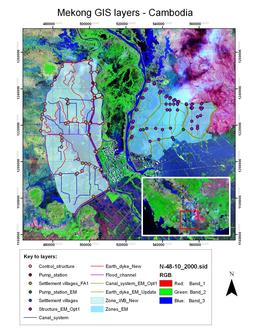 Geographic information systems (which are sometimes known as geospatial information systems) are a set of tools that allow researchers to capture, store, analyse, manage, and present many types of data that are linked to geographical locations. They are extremely powerful systems for analysis of spatial data and are often used to support policy formulation and decision making from local to international scales. A typical visual output from a GIS is shown to the right, where flood model output data for the Meklong River has been overlaid on Landsat satellite imagery so that the flood extent and potential impacts can be analysed.

As part of a wider project developing a conservation strategy for the marine environment of the Galapagos Islands, this research used multi-variate modelling techniques to develop a habitat suitability prediction model for coral reefs.

Developing methods to monitor the clarity of the atmosphere from satellites at 100,000 times the resolution of previous methods. This can then be used to monitor air pollution, correct satellite images and provide data for climate studies. Simulation is used to model the effects of atmospheric pollution on light passing through the atmosphere, and to test the method under 'synthetic atmospheres'.

A single species spatially-explicit agent-based model has been developed that illustrates the role of simulation modelling, integrated with an adapted least-cost modelling approach and real-world geographical data, in exploring jaguar population dynamics.

Ground calibration targets (GCTs) play a vital role in atmospheric correction of satellite sensor data in the optical region, but selecting suitable targets is a subjective and time- consuming task. This project is developing methods to automatically select suitable GCTs, using a combination of remotely sensed multispectral and topographic data.

This project creates a generic operational simulation of Unmanned Air Vehicle Operations. UAVs can be valued for their mission-suitability and compared against various configurations.

Coastal deltas, on which over half a billion people live worldwide, maintain elevation above sea level by retaining sediment on their surfaces. The aim of this research is to project future fluvial sediment delivery to 47 deltas under environmental change scenarios to assess the sustainability of deltas environments globally.

This research is designed to explore the nature of the relationships between Portus, Rome, and other selected ports in the Mediterranean and to establish patterns and the changing nature of trading networks derived from the distribution of known Roman artefacts.

Using and integrating least-cost models and agent-based simulations to explore the way in which mammals interact with, and hence move, through fragmented landscapes.

SECSE brought together an interdisciplinary team of scientists working on an ambitious three-and-a-half year project titled. The research cluster spanned neuroscience, artificial intelligence, geography, and complex systems in an attempt to understand the role of spatial organization and spatial processes in complex networks within the domains of neural control, geo-information systems and distributed IT systems such as those implicated in air-traffic control.

Areas of sand dunes (known as dunefields) develop complex patterns over time. These are influenced by both the past and present environmental conditions, including surface moisture, vegetation distribution and human impact. This project develops a method of automated pattern analysis which allow the patterns produced by a large number of sand dune evolution simulations (performed using the DECAL model) to be quantified over time.

This project has as main purpose to investigate through spatial analysis and computational modelling the variables and factors that influenced how humans traveled during prehistoric times.
One of the principal objectives will be to clarify the role that certain landscape elements (i.e megalithic monuments) played in terrestrial navigation and territorial definition.

This project is supported by CONACYT (Mexico) as a doctoral research by Patricia Murrieta-Flores under the supervision of Dr. David Wheatley (University of Southampton) and Dr. Leonardo Garcia Sanjuan (University of Seville, Spain). It also counts with the collaboration of Dr. Dimitrij Mlekuz (Gent University, Belgium).

Iris Kramer
None, None