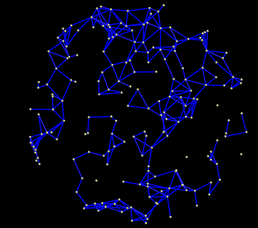 A random network embedded on a disc

SECSE brought together an interdisciplinary team of scientists working on an ambitious three-and-a-half year project titled. The research cluster spanned neuroscience, artificial intelligence, geography, and complex systems in an attempt to understand the role of spatial organization and spatial processes in complex networks within the domains of neural control, geo-information systems and distributed IT systems such as those implicated in air-traffic control.

A key driver for the project was IT's current "network transition": from traditional systems comprising relatively isolated hierarchically organised computational elements to large-scale, massively interconnected systems that are physically distributed and affected by local conditions yet must remain secure, robust, and efficient.