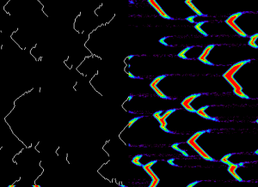 An example of dunes created by the DECAL simulation (right) and their raw extracted crests (left).

The complex patterns which develop in dune fields can be quantified using pattern metrics such as number of dunes, average crest length, defect density and nearest neighbour R-values. In the literature, dune crests have been traced manually from aerial photographs or digital elevation models. This project aims to develop an automated procedure to trace dune crests from Digital Elevation Models (DEMs) and then calculate pattern metrics from this data. In this project the DEMs are sourced from the DECAL model, but the method has also been shown to work on real-world DEMs, such as the ASTER Global DEM product.

For this project, the DECAL model (Nield and Baas, 2008, based upon Werner, 1995) was extended to record the surface moisture at each point in the study area and then alter the probabilities of sand erosion and deposition based on the surface moisture at that point. Furthermore, the surface moisture at each point was allowed to change over time based on the balance of erosion and deposition at that point (with burial of a surface generally decreasing surface moisture). The Iridis cluster was used to run these simulations as they are significantly more computationally intensive than the standard DECAL model. The ability to submit many jobs to run in parallel on Iridis allowed large numbers of simulations with large grid sizes to be run quickly, and thus provided statistically significant sample sizes for the study. Iridis was also used to run the crest extraction procedure, giving a fully automated process from input data to extracted crests.

Results confirmed those found in real-world dunefields (Rachal and Dugas, 2009; Ewing and Kocurek, 2006), suggesting that increased surface moisture leads to significant dunefield disorganisation. After moisture is introduced into the dunefield the number of dunes increases rapidly and the sediment transport rate decreases, reducing the potential for dune-dune interactions, and thus reversing the self-organisation trend. There is potential for significantly more work based on the two themes of this project: automated crest extraction and surface moisture modelling. The crest extraction procedure is currently under development to improve its performance on real-world data, and, as this is likely to significantly increase its computational complexity, the use of Iridis will become even more important.