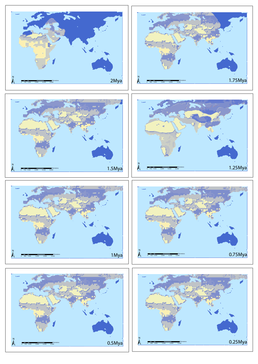 Some results of the simulation developed to investigate the Movius Line.

A lot of behaviours that can be called fundamentally human evolved during the Palaeolithic. The large-scale phenomena such as tool-making, social organisation or language that developed early in the history of the genus Homo need more appreciation and research if we are to better understand the behaviour of humans now. One of these profoundly human features is the propensity to move or migrate resulting in the global distribution of humans through virtually every kind of environment (Gamble 1993). We know that the process started ca. 1.8Mya (million years ago) and that the place of departure is most likely located in Africa. However, the rate, directions or even reasons for the dispersal remain uncertain (Dennell 2005; Rolland 2010; Stiner 2002).

Research into the first human dispersal can therefore make a valuable contribution to our understanding of one of the most fundamental of human features. This is exactly where my principal research interest lies: in exploring when, how and why humans populated the entire globe.

First ‘Out of Africa’ – issues

The study of early hominid dispersals is a complex academic issue (for a summary see: Bar-Yosef & Belfer-Cohen 2011) integrating data from several very different disciplines: archaeology, biological anthropology, paleozoology, palaeoclimate studies, geology and, most recently, genetics. The multidisciplinary nature of this topic is a challenge as it forces an individual to combine highly specialist knowledge from several fields. However, it is also a blessing as it allows for a richer interpretation of the different aspects of the dispersal and enables crosschecking hypotheses against independent data types.

Several issues related to the first human dispersal have been well recognized. For example, the dependency of hominids on bodily adaptations rather than on social or technological tools means that environmental factors played a crucial role in the dispersal (Hughes et al. 2007; van der Made & Mateos 2010). However, our current knowledge of the palaeoclimate is patchy at best, making the interpretation challenging.

Another significant pattern is the so-called Movius line, a technological divide running along the Rhine, through the Middle East and south of the Himalayas. It delineates the border between two distinctive stone tool traditions (Mode 1 and Mode 2) and has been known since 1948 (Movius 1948). Previously believed to mirror subsequent waves of dispersal, or alternative environmental adaptations (Lycett & Bae 2010), it has recently been attributed to a border between regions of different population density (Lycett 2009). However, no satisfactory explanation for this phenomenon is currently available.

Other models have been suggested only recently, stressing the importance of tectonics (King & Bailey 2006), places of high biodiversity (Carrión et al. 2011) and submerged landscapes (Gamble personal comm.). None of these have been explored in depth so far. These few examples show how complex the pattern of early human dispersal is and how little we know about it. How many ‘out of Africa’ dispersals happened in the past? What is the role of movements related to the glacial onsets and their timing? Was the dispersal unidirectional? What is the relative importance of factors affecting dispersal? And finally the most fundamental question: why people dispersed in the first place?

The current methodology in archaeology for the study of the first dispersal is largely based on qualitative considerations where common sense arguments are being thrown back and forth without quantitative validation or making sure that the assumptions are explicitly presented. I believe that the discussion should be complemented with more quantitative approaches.

Critical applications of models and techniques already developed in other disciplines such as climate modelling or animal dispersal modelling could be used to address the phenomenon of early hominid dispersal. However, the creation of an original, comprehensive model of hominid dispersal designed specifically with archaeological issues in mind could provide a useful and highly innovative tool for the whole next generation of researchers in this field.

I believe that the unique archaeological question of the first hominid dispersal holds the potential to stimulate original applications in modelling complex systems, this list being far from exhaustive: 1. Other human dispersals: the Modern Human ‘Out of Africa’ 100kya (thousand years ago), the dispersal of Modern Humans into Australia and Americas; 2. Modelling past climate change; 3. Modelling past population dynamics (integrating the genetic data);