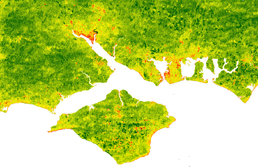 This project is developing a new algorithm to measure the clarity of the atmosphere from satellites at over 100,000 times the resolution of present methods. The measure, called Aerosol Optical Thickness (AOT), is related to the levels of air pollution, as well as being a useful measurement in its own right (for example, it is required for satellite image atmospheric correction and is used in climate studies). Current operational methods only provide measurements at 10km resolution, which severely limits the application of the data. For example, in terms of air pollution, current products would only provide about a dozen measurements over London: nowhere near enough to be able to discover which roads contribute most to pollution, or to monitor pollution levels around schools or hospitals. My method is aiming to produce measurements at 30m (possibly even lower in future versions of the method), which be a revolution in the utility of these data.

The new method is based on a number of methods originally developed during the 1970s for assessing haze in satellite images, and involves updating these methods in a modern context to make them more sensitive to aerosol concentrations. Further benefits of this method is that it does not require special satellite capabilities, such as multi-angular measurements, but can be derived from standard visible and infra-red optical imagery.

The Iridis cluster is used extensively in this project to estimate the effect of aerosols on light passing through the atmosphere, and to calculate the light which would be received at the satellite given certain atmospheric conditions and land cover. The images I am using (from the Landsat satellite) have over 36 million pixels, each of which has 7 measurements, and thus processing these data is very computationally-intensive. Luckily, parts of this processing are trivially-parallelisable, so they can be performed far more quickly on Iridis. I have also developed a model interface called Py6S to help run the simulations, and this interface now parallelises model calls where appropriate.