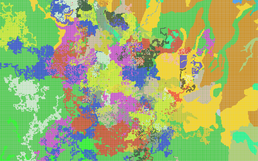 A single species spatially-explicit agent-based model has been developed that illustrates the role of simulation modelling, integrated with an adapted least-cost modelling approach and real-world geographical data, in exploring jaguar population dynamics. The range of the jaguar, Panthera onca, has been reduced by around 50% and now consists largely of a fragmented heterogeneous landscape. Jaguars are a flexible and adaptable cat and utilise a wide-range of habitats but remain an elusive and difficult species to study and a clear gap exists for studies utilising spatially-explicit agent-based models of large cats in large-scale landscapes. There has been a shift in ecological modelling from the traditional ‘top-down' approaches to the ‘bottom-up' individual-based approach that better reflect the complex nature of populations and ecosystems. These agent-based models capture the variability amongst individuals and the interactions between individuals and the environment, as well as multiple-scale interactions and feedback: features usually ignored in analytical models.

The goal here is to develop a model that can explore and predict the effect of landscape structure on population resilience of wild jaguars in central Belize. Presented, is a model that realistically captures the behaviour and dynamics of a population of jaguars in a real-world setting. The construction and application of the simulation model is described in detail, along with its calibration, validation and sensitivity analysis.

Realistic population dynamics and territory sizes were obtained, with agents undergoing typical reproductive and mortality events. Validation of model output to field data produced similar trends, although the model appears less sensitive to more socially motivated and fine-scale movements, outside those directed towards feeding and reproduction. Mortality, fecundity and the level of interaction between agents are critical in driving the dynamics of simulated populations.