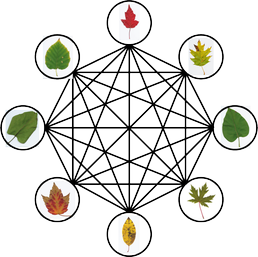 Networks of species can develop an associative memory

Ecosystems may exhibit collective adaptive properties that arise from natural selection operating on their component species. These properties include the ability of the ecosystem to return to specific configurations of species, in a manner highly analogous to mechanisms of associative learning in neural networks. This “memory” enables the ecosystem to return to a previous species composition after ecological disruption that may temporarily, but drastically alter species levels. In addition, preferred configurations of species become more stable over time, making them more resistant to future evolutionary perturbations. The longer an ecosystem remains at a specific composition, the stronger this memory becomes.

Preserved mutations are those that increase the recipient’s growth rate. These mutations will be those that increase cooperation between species that co-occur at the expense of decreasing cooperation between species that do not. The nature of these changes in the network is equivalent to the premise in neuroscience that memories form when “neurons that fire together, wire together”. It is creation of these associations that gives this ecosystem model the ability to return to specific species configurations after a disruption.

Ecosystem-level adaptation has often been rejected as implausible as selection cannot ‘choose between’ ecosystems. This project demonstrates a simple mechanism by which an ecosystem can exhibit system level adaptation that is dependent only on natural selection operating on its component species.