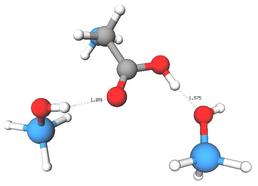 This work was performed as part of a Independent Research Project as part of the MSc component of the Complex Systems Simulation Doctoral Training Center Course. The aim of the project was to learn about Quantum Chemistry Simulation in the context of an area I am interested in - Silica/Biomolecule interaces.

The interface between biological molecules and inorganic surfaces is currently poorly understood at a molecular scale due to its inherent complexity, and of great importance in areas such as Bionanotechnology. Replicating the work of Lomenech et al. [1], the adsorption of neutral glycine onto amorphous silica was investigated using Density Functional Theory (DFT) calculations at the B3LYP/6-31++G** level using a cluster-based approach. Various binding configurations were geometry optimised, and their vibrational frequencies calculated and compared to experimental data. With one silanol, the most favorable binding mode was via the carboxyl group acting as both a H-bond donor and acceptor. With two silanols this was supplemented with additional H-bonds from the amine moiety, resulting in a increased adsorption energy. Vibrational calculations demonstrate a strong bathochromatic shift of the carbonyl stretch with increasing numbers of H-bonds between the carboxyl and the silanols which, supported by IR-spectroscopy data, suggests that several H-bonds occur between the glycine and silica surface.