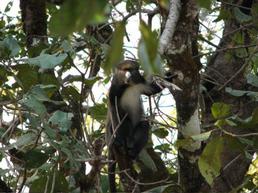 A male putty-nosed monkey in the Nigerian rainforest.

Observations of alarm calling behaviour in putty-nosed monkeys are suggestive of a link with human language evolution. They also suggest that the monkeys may be capable of taking the perspective of others, i.e., employing a theory of mind. However, as is often the case in studies of animal behaviour and cognition, competing theories are under-determined by the available data. Computational modelling, and in particular the use of individual-based simulations, is an effective way to reduce the size of the pool of candidate explanations. Simulation achieves this both through the classification of evolutionary trajectories as either plausible or implausible, and by putting lower bounds on the cognitive complexity required to perform particular behaviours. The project uses both of these strategies to understand the extent to which the alarm calls of putty-nosed monkeys are likely to be a good model for human language evolution.