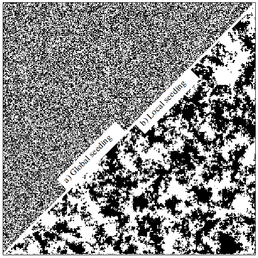 Models which explore the possibilities of emergent self-regulation in the Earth system often assume the timescales associated with changes in various sub-systems to be predetermined. Given their importance in guiding the fixed point dynamics of such models, relatively little formalism has been established. We analyse a classic model of environmental self-regulation, Daisyworld, and interpret the original equations for model temperature, changes in insolation, and self-organisation of the biota as an important separation of timescales. This allows a simple analytical solution where the model is reduced to two states while retaining important characteristics of the original model. We explore the consequences of relaxing some key assumptions. We show that increasing the rate of change of insolation relative to adaptation of the biota shows a sharp transition between regulating, and lifeless states. Additionally, in slowing the rate of model temperature change relative to the adapting biota we derive expressions for the damping rate of fluctuations, along with a threshold beyond which damped oscillations occur. We relax the assumption that seeding occurs globally by extending this analysis to solve a two-dimensional cellular automata Daisyworld. We conclude by reviewing a number of previous Daisyworld models and make explicit their respective timescales, and how their behaviour can be understood in light of our analysis.