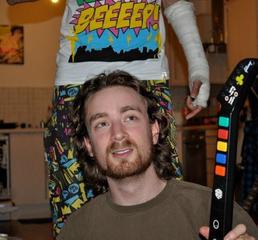 My research interests are focussed around self-organisation of systems of many interacting components as viewed through the lens of thermodynamics and statistical physics more generally.

The vast majority of naturally occurring systems exist far from equilibrium, where they may exploit energy density gradients to self-organise, in turn modifying the gradient. I believe that the interplay and co-evolution of components and the energy gradient they are subjected to to be the general ingredients for the emergence of complexity.

To gain an understanding of these complex dissipative systems of many degrees of freedom, I approach from the ground up, reformulating existing conceptual models not only in a simple terms as possible, but with emphasis on identifying, and analysing the relevant energy gradient and it's co-evolution with system components.

Can the principle of Maximum Entropy Production be used to predict the steady states of a Rayleigh-Bernard convective system?

Renormalisation of 2D cellular automata with an absorbing state