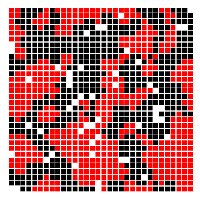 Example of beginning spatial separation of the agents on the grid

The traditional segregation model introduced by Schelling is one of the first models showing that macro-level behaviour might not follow intuitively from micro-level behaviour. Even though the behaviour of the individual components is governed by very simple rules, the resulting system behaviour is complex, meaning that it needs to be simulated to determine how a certain initial setup will develop over time.

In the original model, two distinct types of agents exist. These two types stand for a property that people can observe in others and therefore discriminate upon. Examples for this are skin-colour, gender or language. The agents have a threshold describing how many agents in their neighbourhood they want to be of their own type. Each agent evaluates its current location and if its threshold is not met, it decides to move to a place that fulfils its requirements. As it changes both the place it is moving from as well as the place it is moving to, the resulting dynamics are hard to predict.

We investigate the effects of the addition of a social network and the influence of the parameters on the system's dynamics.