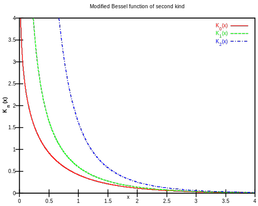 Gnuplot is a command line plotting program to generate 2-D and 3-D plots of mathematical functions and data. Gnuplot can be used to visualise results directly on the screen or to create figures in a wide variety of output formats (from vectorial formats such as EPS, PDF, SVG to raster formats such as PNG and JPG). When launched, Gnuplot offers a prompt where commands can be entered interactively. Commands can be abbreviated, making Gnuplot a valuable tool for quick-plotting. Example. "p x" can be used as an abbreviation for "plot x" to plot the function f(x) = x. Example. "plot 'data.dat' using 1:2 with lines" can be abbreviated as "p 'data.dat' u 1:2 w l".

A Fast Multipole Method for the Bessel potential

The fast multipole method (FMM) proposed by Greengard and Rokhlin provides a method by which the O(N-squared) many-body problem can be reduced to O(N) complexity. In this project, a multipole method is developed to calculate the energy of a system of vortices in a high temperature superconductor, where the many-body interactions give rise to rich and complex physics. The method developed here is suitable for systems where the interactions are governed by a Bessel potential rather than the usual logarithmic potentials occurring in gravitational and electrostatic problems. We derive and apply vectorised forms of the Gegenbauer addition formulae in order to achieve the O(N) scaling associated with fast multipole methods.

Engine designers want computer programs to help them invent ways to use less fuel and produce less pollution. This research aims to provide an accurate and practical model for the injection and combustion of liquid fuel blends.

The turbulent flow around a circular cylinder is a widely studied problem in fluid dynamics. At a certain characteristic Reynolds numbers the development of a turbulent wake occurs simultaneously with separation of the laminar boundary layer. The mechanisms defining this critical flow state are very complex to predict computationally. In this project the suitability of novel non-linear eddy viscosity closures and a hybrid Flow Simulation Methodology formulation to face these massively separated flows is studied. The flow predicting capabilities of the baseline EASM, ?-?-EASM and FSM-?-?-EASM tested are contrasted with the industrial renowned k-?-SST turbulence model. In the visualisation of the results it is evident that the ?-?-EASM has greater flexibility estimating the components of the Reynolds stresses with respect to the baseline EASM and the k-?-SST. Although dome differences are observed, the prediction of the critical flow around a cylinder is not accurately achieved by any of these RANS models, but the FSM-?-?-EASM shows great resemblance with the validation data, demonstrating capabilities of resolving very complex flow phenomena with minimum user input if the computational grid is fine enough. In order to demonstrate even greater advantages of non-linear models it was postulated that the addition of a streamwise impinging vortex hitting the leading edge of the cylinder would make the flow field fully three-dimensional. First attempts were tried in this route but time constraints limited the ultimate scope of the present work.

We non-perturbatively compute the coupling between B* and B pi meson states relying on relativistic heavy quarks and domain wall light fermions. The coupling is of importance for an effective description of hadronic heavy meson decays.

Control and Prediction of the Organic Solid State

This project aims to produce a computer technology for the prediction of the crystal structure(s) of an organic molecule, that could be used even prior to the synthesis of the compound.

Such a computational study could be done relatively quickly to predict the dangers and opportunities of the solid phases of a molecule under development. Our project will develop the methods of experimental screening for polymorphs and their characterisation, and hence the combination will provide a major new technology for aiding industrial formulation.

A new electrodeposition self-assembly method allows for the growth of well defined mesostructures. This project's aim is to use this method in order to fabricate supraconducting and ferromagnetic mesostructures. Numerical methods based on well-established models are used in order to characterise the grown structures.

This is a Knowledge Transfer Partnership project is a collaboration between the University of Southampton and TSL Technology Ltd. to develop computational fluid dynamics software design tools for modelling and optimising the design of propeller thrusters and water turbine generators.

The research is the main subject of the PhD topic. It regards the application of fluid structure interaction techniques to the domain of yacht sails simulation

Gravitational waves, once detected, will give information about the extremes of space and time. Compact objects such as neutron stars are perfect locations for generating such waves.

Hadronic structure on the computer

In experiments at the Large Hadron Collider (LHC) at CERN, Geneva, the interactions that occur between the colliding particles (protons in this case) can be factorised into a simple scattering between two constituent particles, called quarks, followed by a hadronisation process, which describes the dynamics of forming the bound proton states. Quarks are particles within the proton that bind to form composite particles (hadrons) such as a proton. The scattering process can be computed relatively easily, but hadronisation is intrinsically non-perturbative and hard to calculate. Lattice QCD (computer simulation of QCD on a discrete space-time lattice) provides our only known first-principles and systematically-improvable method to address problems like hadronisation. This project uses Iridis to extract parton distribution amplitudes which are experimentally inaccessible, but needed to describe the quark structure of hadrons.

We calculate kaon decay amplitudes on the lattice so we may compare the Standard Model to experiment.

Non-Perturbative Renormalisation on the Lattice

In this project we compute renormalisation factors for various physical observables in a non-perturbative lattice framework. Renormalisation hereby arises due to a fundamental scale dependence of the physical processes.

We use IRIDIS to compute the self-force acting on a solar-mass black hole orbiting a supermassive black hole.

It has been three years since the discovery of a Higgs boson at the CERN LHC and many new insights in Higgs physics were gathered since then. However, its true nature remains unknown to this day. This project aims at exploring the Higgs properties at Future High Energy Colliders beyond the Standard Model to help unveiling its secret.

The multidrug and toxic compound extrusion (MATE) transporters extrude a wide variety of substrates out of both mammalian and bacterial cells via the electrochemical gradient of protons and cations across the membrane. Multiple atomistic simulation are performed on a MATE transporter, NorM from Neisseria gonorrheae (NorM_NG) and NorM from Vibrio cholera (NorM_VC). These simulations have allowed us to identify the nature of the drug-protein/ion-protein interactions, and secondly determine how these interactions contribute to the conformational rearrangements of the protein.

Sizing of civil aircraft is dictated by extreme loads experienced at the limits of flight envelope, for example during gust, turbulence or low speed manoeuvre. The project aims to understand the unsteady aerodynamic behaviour of wings in extreme conditions involving heaving motions near stall.

Thomas Piggot
None, None

Daisuke Sasaki
None, None

Andrea Silva
None, None