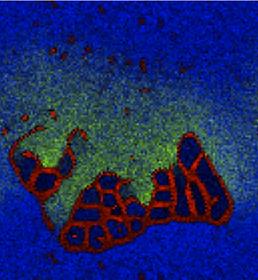 Protocells spontaneously emerge from a homogeneous mix of chemical components. Membranes are shown in red. In the presence of a poisonous substance (green), a colony of protocells resists extermination more effectively than distributed individuals.

Life is the quintessential example of self-organisation. Understanding the mechanisms by which open physical systems can spontaneously form ordered structures is crucial to elucidating the origin of life on Earth (and potentially other planets) as well as a myriad of other natural patterns, which dominate the dynamics of our planet. This project aims to model the behaviour of a set of self-organising organic molecules collectively known as amphiphiles.

Amphiphiles are defined by the characteristic that each molecule contains a region which is hydrophilic (water-loving) and another which is hydrophobic (water-repelling). This differing affinity for water causes them to spontaneously align along the interface which forms when oil and water separate (this separation is caused by the lack of hydrogen bond formation in oil). Hence amphiphiles form stable structures in aqueous environments and environments containing water and non-polar fluids such as oil. These structures facilitate the minimisation of the contact area between water molecules and the water-repelling groups of the amphiphiles. In general amphiphiles reduce the free energy or surface tension of oil-water interfaces. An example of amphiphile structure, the vesicle, is of fundamental biological importance since life has ubiquitously adopted it as a device for cell encapsulation. Every known cell is surrounded by a membrane of amphiphilic molecules. Every cell must be enclosed by such a semi-permeable barrier because any metabolic system relies upon the maintenance of non-equilibrium conditions (the large differences in chemical concentration of biologically relevant substances between the cell and the surrounding medium).

This research aims to assess some basic mechanisms by which amphiphilic molecules, synthesised through simple chemical reaction networks, can form cell-like entities which must adapt to their environment in order to persist. Having extended a model first put forward by Ono and Ikegami [2001], we have already observed behaviour that could be defined in basic ecological terms. And yet our artificial system consists only of chemical substances interacting on a purely local scale. All long range order and coherent behaviours are emergent properties. Due to this short interaction scale, the model is eminently parallelizable. All simulations are performed by Iridis using a C code with MPI routines. These routines allow for the division of computational labour amongst many separate computing cores (typically 8 nodes using 8 cores per node). The MPI routines facilitate communication between the individual cores so that particles and forces can be exchanged across domain boundaries.

Our goal is now to perform simulations with transient environmental conditions. For example, introducing variability in the temperature, water concentration and nutrient supply as a function of time and space will place much greater evolutionary pressure on the artificial cells. This may highlight some of the means by which self-organising, dissipative structures can maintain themselves against external perturbations. Conversely it may also illuminate ways in which robust natural patterns can be rapidly destroyed.

This animation shows a simulation containing only oil and water in a 50:50 ratio. The paramaterised temperature is T=0.1:

The same simulation performed at a temperature of T=0.8:

This simulation contained water, oil and surfactant particles with average densities of 7,7 and 1 particles per lattice site respectively. The temperature was initialised at T=0.1 but is later linearly raised to T=0.4. The system is allowed to relax before the temperature is again linearly returned to T=0.1 at the same rate at which it was previously raised. This experiment illustrated a hysteresis effect induced by 'melting' and 're-freezing' the system.

Protocell model with additional catalyst particle (shown in green) which stimulates the decay of membrane particles. Note the requirement for cells to grow away from the prevailing cloud of autocatalytic destructive particles.