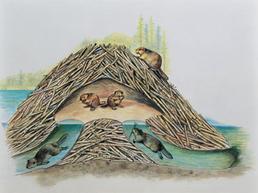 Evolutionary biology is currently experiencing a number of challenges to its central paradigm, the modern evolutionary synthesis. A substantial fraction of these challenges focus on whether the existing framework can adequately explain and quantify the causes and consequences that arise from the reciprocal feedbacks that exist between organisms and their environment. Advocates of niche-construction theory argue that the existing academic disassociation between study of evolutionary and ecological processes will impede future progress in evolutionary biology. These arguments are opposed by those who preserve that a gene’s eye view of evolution is sufficient to explain observed biotic complexity (or at least the majority of it). Attempts to incorporate organism-environment feedback in the form of niche-construction theory have been criticized as both undisciplined, and unhelpful.

This project will seek to explore the validity of niche-construction theory as it applies to cases beyond the current mainstream framework. That is, cases where the effects of changes are either (apparently) non-adaptive, or it is unclear how these behaviors benefit that organisms descendants. It is particularly appropriate that a study of this kind, which will deal with dynamical systems; feedback within these systems; environmental interactions; and long-term predictive difficulties, should be based within a complex systems department.