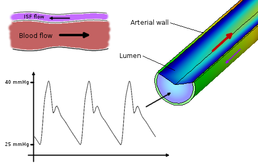 Schematic of perivascular drainage. The blood flow is driven by a pressure pulse into the brain, whereas interstitial fluid (ISF) drains out of the brain in the reverse direction via the arterial wall.

Maintaining metabolite drainage in the brain is a complex but crucial task, which protects the brain from toxic neuronal waste products. Failure of this drainage leads to the accumulation of these harmful substances and cause the destruction of neurons. A well-known example for the consequences of metabolite drainage failure is Alzheimer's disease (AD), which is the most common form of dementia. It is caused by the accumulation of the neuronal metabolite A? as drainage fails with aging and poses one of the biggest health problems in the world with an estimated 35.6 million people affected (WHO). Identifying the mechanisms that drive metabolite drainage in the young has implications for the development of preventive medication and therefore it is an important step along the way to eradicating AD.

While metabolite drainage in other parts of the body is realised through a network of dedicated lymphatic vessels that coexist with the cardiovascular system, the brain does not have such dedicated vessels. There is good experimental evidence that the basement membranes surrounding cerebral arteries fulfil the function of providing the drainage pathways for soluble metabolites. However, fluid flow within these perivascular drainage pathways has to occur in the reverse direction of the blood flow as blood within the arteries flows towards the brain, whereas metabolites have to flow out of the brain towards the lymph nodes in the neck. This observation is very counter-intuitive as one would expect that the mechanisms that drive blood flow towards the brain would also drive any fluid flow within the artery wall towards the brain. Experimental evidence shows that the reverse flow cannot be explained by a pressure gradient and the lack of a widely accepted hypothesis as to how metabolite drainage is realised in the brain suggests that mice model experiments may not be sufficient to resolve these questions.

In this project we aim to investigate the mechanisms that drive perivascular drainage and in particular the role of arterial pulsations using a multidisciplinary approach in order to suggest potential preventive treatment pathways. Our approach focuses on a multiphysics simulation using Comsol, which is coupled with our previously developed mathematical model of a possible valve mechanism that allows for net reverse drainage in the perivascular drainage spaces. This approach has the potential to guide experimental research in order to resolve the many unanswered questions that arise from the pathology of AD.