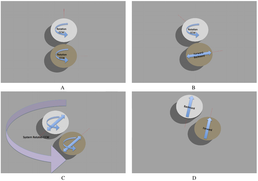 Illustration of the evolved sequence of behaviours in a typical case. A: agents rotate until one reaches a favoured orientation. B: the first agent to achieve this starts moving backwards and forwards. C: the second agent orbits the first until it is alig