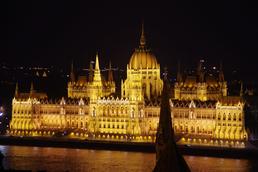 The first phase of the project consisted of data collection in Budapest, Hungary.

After the Second World War the Iron Curtain sliced through the very centre of Europe forming a very real divide in both political and daily lives. In the second half of the 20th century the Soviet regime introduced a new structure to the academic institutions to countries like Poland, Hungary and former Czechoslovakia, including restrictions on contacts with the Western world and ideological pressure previously unknown in these parts of Europe. How did this situation affect researchers on both sides? Was Central European Academia really isolated from western influences? The ‘A Connected Island?’ project funded by SotonDH aims to address this issue using Palaeolithic archaeology as a case study. In ‘A connected island? Evaluating influence and isolation of Central European Palaeolithic researchers during communism’ Iza Romanowska and Tom Brughmans, members of the Archaeological Computing Research Group at the University of Southampton, combine a traditional historiography with novel citation network analysis techniques to approach this issue from a new angle.

For some initial results see: http://www.scribd.com/doc/126190001/a-connected-island-how-the-iron-curtain-affected-palaeolithic-archaeologists-in-central-europe

This project was funded by the SotonDH small grant award.