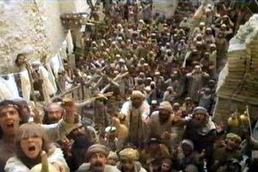 Social and socio-economic systems are those in which people interact with each other, often within cultural and economic institutions and structures. As individuals, developing an implicit understanding of the systems that we are embedded within is key to our ability to operate as human beings. As academics, developing an explicit understanding of these systems presents a major challenge. How do languages, markets, families, and firms, and systems of care, education and governance come about, interact, change and evolve? What keeps these systems stable? Why do they sometimes fail? By exploring how social and socio-economic systems such as these work, we aim to improve our ability to manage our social world.

Using citation network analysis this project aims to investigate the effects that the Cold War had on researchers on both sides of the Iron Curtain.

This interdisciplinary research collaboration arose within the Simple Models of Complex Networks research cluster funded by the EPSRC www.epsrca.ac.uk through the Novel Computation Initiative. Here, leading groups from the Universities of Leeds, Sheffield, Nottingham, Southampton, Royal Holloway and King’s College and industrial partners BT are brought together for the first time to develop novel amorphous computation methods based on the theory of random graphs.

This is a cutting-edge project in demographic methodology, funded by the European Research Council (ERC), through the Consolidator Grant ERC-CoG-2016-725232. Its aim is to develop a ground-breaking simulation model of international migration, based on a population of intelligent, cognitive agents, their social networks and institutions, all interacting with one another. The project also aims to transform the study of migration – one of the most uncertain population processes and a top-priority policy area – by offering a step change in the way it can be understood, predicted, and managed.

This research programme brings together teams of researchers from social sciences, management science and complexity science to develop a suite of models representing the socio-economic and demographic processes and organisations implicated in the UK’s health and social care provision. Integral to the project is working with our partners in the public sector and communicating the results of these models to policymakers allowing them to effectively plan for the future.

Evolving Resilience to Leverage Based Crashes

This project analyses the maturation, initiation and evolution of crashes in the financial markets using an agent-based model.

It takes all sorts: the mathematics of people’s behaviour in financial markets

Replication of a model of group decision making from Sayama et al. (2011), with a revised methodology that alters a conclusion from the original paper.

One cannot escape the recent crises in economics and the lack of understanding of financial markets that has been highlighted by them. Improvements to current market models are already being made and a realisation of the power of agent based modelling in such models is evident. In this project we seek to explore an existing model by Cliff of trader behaviour in continuous double auctions. We investigate the strategies that arise in such auctions when trader parameters are evolved with intent to maximise personal profit. Results show different trading strategies to those evolved by Cliff and explanations are given with regards to the self-interest.

A scoping exercise to determine whether data collection tools of the social sciences can be used effectively in the construction of empirical ABM. Focus fell upon simulating drought coping strategies of Malawian smallholders. Model implementation enabled inferences to be made concerning the impact of drought and input subsidies upon smallholder food security.

Sleeping sickness is a vector-borne, parastic disease which affects millions of people across 36 sub-Saharan African countries. Using agent-based models, we aim to gain a greater understanding of the interactions between the tsetse fly vector and both animal and human hosts.

Building an accurate representation will allow the testing of local interventation scenarios including the closing of watering holes, and the selective spraying of cattle with insecticides.

The recent economic crisis has highlighted a continued vulnerability and lack of understanding in the financial markets. In order to overcome this, many believe that current market models must be improved. Recently, a trend towards agent-based modelling has emerged. Viewing the economy as a complex system is beginning to be seen as key to explaining certain market characteristics that were originally considered anomalies.

One of the fundamental assumptions in economics is that of information efficiency: that the price of a stock reflects its worth, that all possible information about a security is publicly known, and that any changes to price take place instantaneously. In reality, however, this is not the case.

This project considers the use of agents in modelling economic systems and demonstrates the effect of information levels on price discovery using a simple market simulation.

Enrico Gerding
None, None