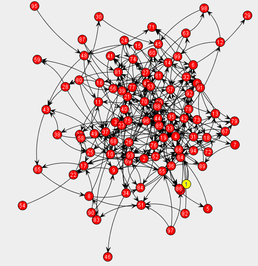 Often when investigating financial systems imaginary network structures are imposed to represent, for example, the social interaction between traders. Usually, these networks are fixed in order to greatly simplify the model. However, in reality, the network can be dynamic and evolutionary, with intricate node and connection diversity that increase its structural complexity. The interaction of these elements can also result in aggregate behaviour that is complex.

This project investigates the endogenous formation of economic networks using agent-based economic modelling. It does this by creating a simulation framework for the Symmetric Connections Model [JW96] made up of autonomous agents and mapping the interaction of these agents over time.

This project also considers the introduction of errors into agent decision-making to determine whether or not the soundness of trader choice signicantly affects the way in which networks are formed and any final equilibrium structure that emerges.

It is found that: