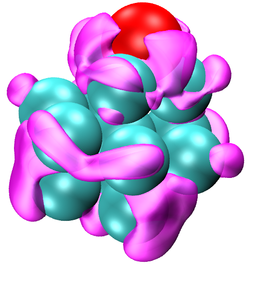 The deformation to the charge density (pink) which arises due to adsorption of Oxygen (red) upon a 13 atom platinum cluster (cyan).

Proton Exchange Membrane Fuel Cells (PEMFCs) are an environmentally friendly alternative to fossil fuel based sources of energy. However, the high cost of the platinum nanoparticle catalysts they require has prevented them from becoming economically viable. This project focuses on using ab initio simulation methods to investigate the reactions which occur on the surface of these nanoparticles, with the aim of gaining insights which can inform catalyst design.

The two chemical reactions of greatest importance to fuel cell catalysis are the adsorption of oxygen and hydroxide on the platinum surface. Accurate description of these reactions requires the use of quantum theory, but such precise descriptions are extremely computationally expensive, almost invariably necessitating the use of supercomputers. ONETEP is a density functional theory (DFT) based programme, designed specifically for performing massively parallel calculations on large systems. Traditional DFT codes describe the system using delocalized functions (e.g. plane waves), but such approaches are computationally demanding. ONETEP utilizes localized functions, which are optimized over the course of the calculation. This method preserves accuracy, whilst greatly reducing the computational cost, enabling simulation of systems of 1000's of atoms when previously only 100's were possible.

Metallic systems pose a serious challenge to programmes like ONETEP. Electrons in large metallic clusters are delocalized, which is at odds with the localized functions ONETEP employs. Yet without the computational gains associated with this localization, the catalytic nanoparticles of interest are too large to be computationally affordable. Theoretical development of finite temperature formulations of DFT have found that accurate description of metallic systems using localized functions is possible. The recent implementation of this approach in ONETEP paves the way for computational study of a new size regime of platinum nanoparticles. This project utilizes these developments to study chemical reactions on catalytic nanoparticles of manufacturable sizes, and investigates the transition between the bulk and finite size regimes.